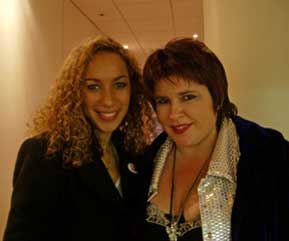 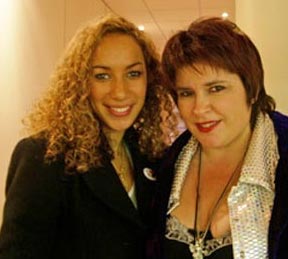 I was delighted to hear that Leona Lewis would be doing a duet with Justin Timberlake. I met Leona on the X-factor Xtra in 2006 where I predicted that she would win and also the following week I made a number of other predictions for her – including that she would go on to record a duet with Justin Timberlake.  I posted these predictions on my website which have remained there ever since.  I was starting to wonder whether I had got it wrong about her duet with Justin. It is sad to hear that someone has leaked the song. Leona deserves every part of her success as she is as humble and kind in real life as she appears on screen. Here are the 2006 predictions in full.

Leona X factor winner as predicted by Michele on Xtra Factor. She is totally sweet, genuine and has a heart of gold. She will be the biggest female star we have ever had. International fame and all good things coming. She will hit America and Europe and go on the Oprah show as well as Letterman. She will be embraced and adored working with the top people. No cheesy first album for Leona. I predict original music written especially for her. Being such a family girl she needs to be careful not to burn herself out in the first hectic year. A three to five year plan, I predict, is already being decided. Within 18 months to two years she will win a clutch of awards here and in the USA. People will be fighting to duet with her and we may even see some world class stars duet on the first album. I also see her do a duet with Justin Timberlake in the future. 16/12/2006

Astrology for Leona and Justine

What is astonishing about Leona is that, on the surface, she seems is quite atypical of her astrological chart. I don’t have Leona’s time of birth, but through her date of birth – 3rd April 1985 – we can establish that she is an Aries with Venus, planet of love, in Aries and Mercury, planet of communication, also in Aries. This should make her impulsive and outgoing but, when I met her, I was struck by how sweet and humble she was.

Leona does have Moon in Virgo which probably explains this as Moon Virgo can make people quite self critical and perfectionist in nature. It is also where she gets her genuine, humble nature. With Mars in Taurus she’s very family orientated and extremely loyal – you couldn’t want a better friend. This would also make her need to know someone for a long time before she completely trusts them one hundred per cent. Interestingly, another other song bird, Celine Dion, is also an Aries with Mars in Taurus. Both place a lot of importance on loyalty and their family and perhaps both channel all that Aries passion into singing!

Justin Timberlake is an Aquarius with Mercury in caring Pisces and Moon, planet of emotions, in wacky Sagittarius. His Mars in Aquarius makes him quite eccentric. He has a lot of empathy for other people but can be emotionally unpredictable. There is no question of his visionary creative ability as this is the chart of a mad genius. Justin probably has a lot of inner conflict but accepts people as they are and is drawn to people for their ideas and mind rather than looks.

I’m not entirely convinced that the song that was leaked on the internet is the one that will be released but if it is there will certainly be another one. A song that matches Leona’s outstanding talents with Justin’s creative genius is bound to appeal to all of their fans right around the world!