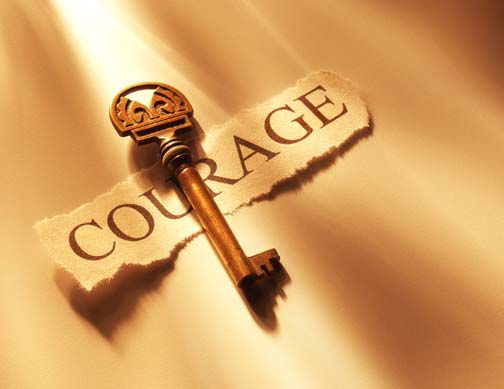 Feel the Fear and Do (or don’t do) It Anyway!

Very often when we are on our soul growth path we can experience fear – fear of success is a common one and I can assure you that the majority of successful people have had to find the courage to deal with that particular demon at some time or another. Stepping outside the familiar – even if that familiar thing isn’t terribly supportive to our growth – such as leaving a toxic relationship for example, can bring up all kinds of fears such as the fear of being alone. Embracing success can also be fearful if we have spent our lives mired in defeat and failure – we fear the unknown and if we have no experience of what success feels like we can block our progress just to keep ourselves ‘safe’ in the familiar.

As the best-selling book by Susan Jeffers tells us we need to Feel the Fear and Do it Anyway.

Courage to have an open mind

But sometimes courage means doing nothing. Courage isn’t necessarily about taking action in the face of fear so much as being open when confronted with something we fear and we can be called upon to demonstrate this kind of courage even in the most everyday and mundane of circumstances. Sometimes we need to sit back and do nothing.

There’s a great story about an Outward Bound leader who putting students through their paces on a trip was warned by their teacher than one young man was a ‘gang leader’ and as the trip progressed this young man’s personality did appear to stand out. However, the Outward Bound leader decided not to take on the teacher’s prejudice and just observe the young man for the time being.

When they stopped to make camp for the night he started to write in his journal and the young man came over and asked him what he was doing. ‘Writing poetry,’ he explained. The young man went away and some time later came back and handed the leader some scribblings. On them were poems he’d just written that the leader described as ‘nothing short of beautiful’. The boy had revealed a side of himself that went beyond the teacher’s attempt to pigeonhole him just because the leader had shown the courage to keep an open mind.

Courage to express yourself