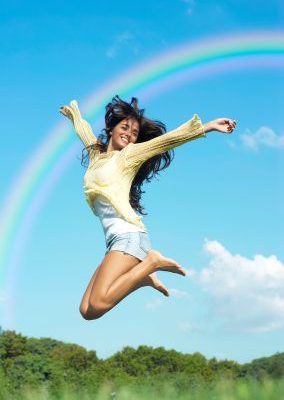 Have you ever squashed down your own dreams, desires or ambitions, telling yourself that you just have to be realistic and accept things the way that they are?

If you’re working with the Law of Attraction, you might be familiar with the idea that it’s more powerful to think about the way that we want things to be than to focus on the way that they are.

That very notion itself can send up massive waves of resistance, and that resistance might just be the very thing that lowers your vibration, which slows down your ability to attract what you want, setting up the idea that you were right in the first place to doubt your own powers of manifestation.

Focusing on what you want is one of the main principles of magic that is echoed in just about every ancient system that you can think of.  For example, the Hawaiin system of Huna works on the principles of only pouring energy and attention into what you want.

Psychologists have found that if we believe that we have more influence than we might actually have, or are convinced that things will turn out well, even though the ‘real’ odds might be against us, it seems that we are actually happier and, more importantly, more caring towards others and far more capable of being creative.  In other words, sometimes in order to do good things we have to stop sternly telling ourselves to be realistic and take a leap of faith.

The importance of staying firmly focussed on what you can do and building on what you do well is also something that is echoed by US personal success coach, Anthony Robbins, who has coached athletes back to performing their best, particularly after a losing streak might have knocked their confidence.

Over Christmas I watched a documentary on the making of the film ‘Apocalypse Now’ by my dear friend George Hickenlooper who tragically died in 2010.  I was absolutely blown away by the sheer scale of the film that Francis Ford Coppola set out to make, and by the almost overwhelming obstacles that he had to overcome along the way to getting it made.  Being realistic, he might have thrown in the towel at so many points along the way, but instead what comes across is his absolute passionate conviction that he was going to finish it, and that’s exactly what he did.

Henry Ford said, “Whether you think that you can, or that you can’t, you are usually right.”.  Your reality will follow where you put your focus, like The Fool stepping out in the Tarot in full confidence that the ground will rise up to meet him, or that even if he takes a tumble he’ll be just fine.

Whatever dreams or ambitions you have set yourself are the jewels of your life.  They need to be nurtured and treasured.  Treat them with love and attention and feed them every day with thought, deed and word, no matter how big or small.  That’s the way to make them grow! As always, “You are more powerful than you could possibly know!”