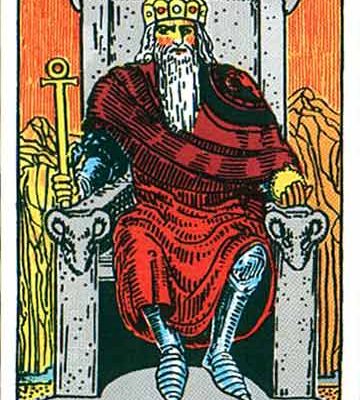 I received a great question in response to a previous 21st century psychic series post; asking about the tarot card The Emperor. So let’s take a totally modern look at this ancient archetype.

I always think of The Emperor as being the daddy of the major arcana. When he appears in your Tarot reading, you’re being encouraged to dive into an exploration of authority.  The Emperor embodies masculine or yang energy, but this tarot card can also refer to women in authority roles.

Look around for an authority figure along the lines of a boss, parent or partner. They might have power over you, as in a boss; or they could wield another kind of power, like the kind that the leader in a group of friends has.  This tarot card turning up could also mean that you are The Emperor; and it’s time to delve into how you handle any kind of authority.

When The Emperor is in his power, he uses his authority wisely by empowering those beneath him.  He also gets things done on a massive and spectacular scale.

His shadow side does mean that he can be a bit overbearing and controlling; and treat people around him as though they are all kids that need keeping in order.

On the empowered side, look around for a mentor; someone who can take you under their wing and coach you towards success in your own life.  Or maybe you’re being encouraged to step into your role as a mentor of others.

But what if you’re tangled up with a shadow Emperor?

The Emperor and You

If you’re The Emperor, and you sense that you are coming from your shadow side, delve into what might lie underneath. Are you scared of losing control? Are you frightened that if someone else steps into their power, they might walk away or ruin all your hard work? Have you developed the unconscious belief that you are responsible for everything and everyone and woe betide you if you let go?

If you can draw on his amazing qualities of being able to empower others, you might discover a whole new life where you get to relax and let others sometimes take the lead or at least shoulder their share.  Think about famous Emperors from history.  If they were using all of their psychic energy to hang on to their position and didn’t know who they could really trust and who was plotting a takeover behind their backs, it must have been quite a lonely existence!

If you’re running up against a shadow Emperor, don’t be tempted to get involved in a fight or power struggle.  As their name suggests, Emperors have everything it takes to go to war and are likely to want to win at any cost.  You could end up totally depleting your precious psychic energy in daily battles that leave you demoralised and exhausted.

Step into your power

Step into your own power. Say a loving, firm and gentle no if you need to. You might have to decide whether you want to carry on living in an oppressive regime,  even if it offers you a kind of security and protection, or whether it’s time to move on.  Sooner or later in our lives, we all have to embrace our own power and if you have always run from dealing with authority, you may find yourself meeting him later down the line to give you another chance to evolve.

If you decide to tackle the relationship, talk to him (or her) in terms he will understand.  Show him that you understand the importance of whatever it is he is spending all of his psychic energy protecting.  Negotiate small steps that take you both forward.  You may even help him transform from his shadow into his most empowered self.  With the right energy, you can act as an alchemical force of evolution and at that point you may recognise that this is a soul mate who came to help you find your true power.

If you want to bring in some ritual magic, burn some frankincense as this is believed to have properties that are good for psychic cleansing and psychic protection.  It is the incense of Kings.  You can also tuck the Tarot card underneath your pillow or slip him in your pocket and ask for his protection as you take these important steps towards your own liberation.

I love getting your questions, so do keep asking!