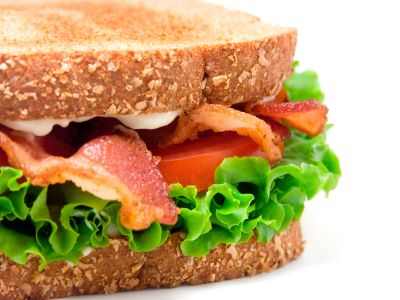 If you find that you cannot seem to get beyond repeating certain kinds of patterns and experiences and are struggling to draw new things into your life, there is a way through!

What you have to understand to get there is the nature of the universe, the way that your mind works, the role of consciousness and what a humble sandwich might reveal in terms of the barriers to your creativity.

Advances in fields such as quantum physics have shown us that the universe is a place of amazing possibility and we’ve only just begun to touch the edges of truly understanding its infinite nature.

Added to that, a greater understanding of the role that consciousness and our minds play in connecting us to the vastness of what is possible can help us explore even further into the outer limits of potential.

Consciousness is an awareness of thought that lies beyond thought itself.  It’s consciousness that allows you to step back from your own thoughts and say, what do I think about what I think?  And even more powerfully, would it be better if I thought something different?

This is especially important when we are working with Cosmic Ordering or the Law of Attraction, because both work on the basis of what we actually think and believe (and not what we know we should think or believe!).  As Buddha himself said, “We are what we think. All that we are arises with our thoughts. With our thoughts, we make the world.”

What we think and believe feeds out into the universe and acts as an attractor force.  As Shamans have been telling us since the dawn of time, if we want our outer world to change, we must transform ourselves.  When we are transformed, we can step into the cosmic web, non-ordinary reality, or what a Shaman might experience as being another layer of a much wider reality.

But here’s the thing.  It’s our mind, with all of its thoughts, that allows us to understand that this is what we need to do, but our mind can only take us so far because of the inevitable limits that exist around our thinking.  Our minds can take us to the door that leads us to non-ordinary reality, or the whole of the universe,  but we have to go beyond our mind to fully step into through it.

Co-creation is most powerful when we do it from the space of non-ordinary reality, or the whole of the cosmic web of infinite possibility that exists in the universe.  That’s where futures that our ordinary minds struggle to imagine are found.

When we co-create from our mind, we are likely to actually just recreate a different form of the past rather than a magical, limitless future.

Bear with me a minute and I’ll illustrate what I mean!  Think of a sandwich.  Any sandwich.  You supply the detail.  It’s almost one hundred per cent certain that the sandwich that sprang to your mind will be a full or composite representation of a sandwich you have previously encountered.  It might be the sandwich you ate for lunch yesterday, or a picture of a sandwich that you’ve conjured up from seeing somewhere , but it’s highly unlikely you immediately thought of a sandwich that lies beyond your direct or indirect experience.  This becomes especially interesting if you are from a culture where sandwiches aren’t the norm.  If that’s the case, your trusty brain will have ferreted around for any images of sandwiches you might have come across in films or adverts or drawn a total blank.

The point about that tasty exercise is to show you one of the ways in which we know the mind works.  The mind is a bit like a computer with an extraordinary filing system that links things in many ways for all sorts of useful reasons.  As we take information in, it codes and stores it for later retrieval.  Imagine that you are watching television and you see an advert for a holiday showing a sandcastle.  Now imagine that you have a million tiny librarians on standby in your mind, waiting to help you find references for all of the information that you are receiving through all of your senses.

As the sandcastle flashes up on the television, the librarians will check the information coming in and say, “”We’ve seen that before….where did I store that image?  Ah!  Over there in the Childhood Holiday section.  That’s a sandcastle!  Right, but we’re adults now and we’re not on holiday, we’re watching a television advert.  Do we have a section called Adverts on the Television?  We do!  So let’s put it there, and we’d better create a subsection called Holiday adverts.  Then we’ll link this to the Childhood Holiday section so we can cross reference when we need to.”

This is why learning something totally new takes us a bit longer, because we are having to create the internal  infrastructure in which we can store the information.

So how does that link to the Law of Attraction or Cosmic Ordering?  In the next article, I’ll explain more – and tell you how you can get around that sandwich and into the dance of creation itself!