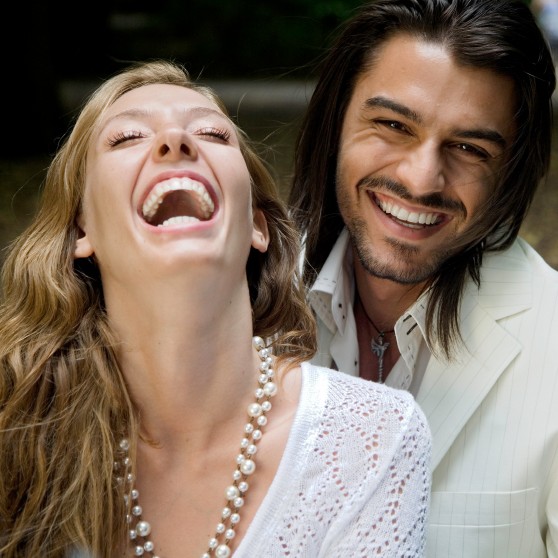 When was the last time you had a really good laugh – the kind that makes your sides hurt and tears pour from your eyes?

Laughter lowers stress hormones like epinephrine, cortisol, and dopamine.  Not only does that mean a good laugh makes you feel great, but surprisingly enough it can also help you lose weight as raised levels of these hormones actually contribute to us piling on the pounds.

A good chuckle is akin to a mini-aerobic workout.  It increases your breath rate and boosts your body temperature too.  It works the stomach muscles, massages your internal organs and sends a whoosh of oxygen around your body.

When suffering from painful bouts of arthritis, journalist and author Norman Cousins found that just ten minutes of laughing at his favourite comedy films allowed him to get two hours of pain free sleep.

Cousins went on to become adjunct professor at the School of Medicine at the University of California, Los Angeles, where he investigated the effects of emotions on biological states and health and became one of the early noted pioneers in what became known as psycho- neuro immunology – a field that looks at the link between the mind and the body in terms of health.

Cousins was absolutely convinced of the benefits that a good belly laugh bought him. Not all doctors are convinced of its magic-bullet qualities, but you don’t need a scientist to tell you that when you’re laughing loads, life just seems a lot lighter.  Even being able to laugh at ourselves helps us handle and shift patterns of behaviour we want to break.

There isn’t one prescription for humour, so if you feel that you could do with a laughter boost, what tickles your funny bone is going to be absolutely unique to you.  Watching comedy shows and funny films is a good short cut to a giggle, but it’s interesting how we can often laugh more when we shed the shackles of adult seriousness and get back to playing like children again – especially as researchers have long noted that children laugh a lot more than adults. At one of my workshops I had people out blowing soap bubbles like big kids.  It’s also fascinating that laughing baby clips continually bust you tube ratings, drawing viewers in the hundreds of millions.

Research on emotional contagion show us that we ‘catch’ emotions from others.  Studies of how mirror neurones work tell us that we have to mimic aspects of other people’s expressions to understand how they are feeling.  So let’s try an informal experiment here – watch the clip below and let me know how it affects your mood!

Find out more about laughter