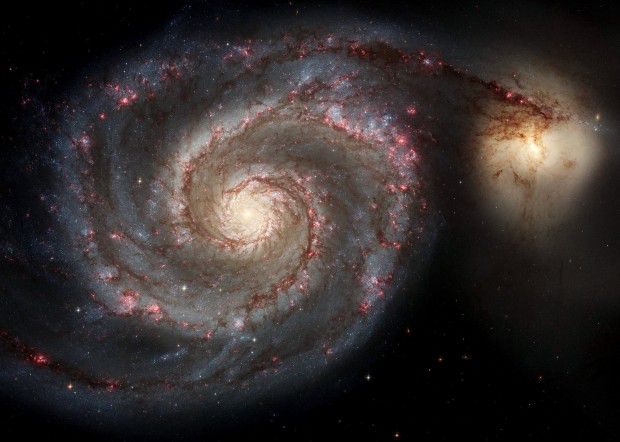 Could Dark Matter Hold the Key To The Reality Riddle and Your Goals?

Welcome to the Dark Side. Did you know that 90% of what the universe (and therefore also you and I) is made up of actually can’t be seen? We’ve discussed before how everything has more empty space in it than actual atoms and molecules. But is this space actually empty? According to physicists, it’s actually filled with dark matter; something that cannot be detected by normal means. For example, a telescope; or even something like the Large Hadron Collider. However, scientists know it exists because of its effect on what we can see – galaxies, stars and also sub-atomic particles.

Very little is known however about Dark Matter. But new research suggests that it could hold the key to solving some of the riddles which have emerged via Quantum mechanics. For example, Quantum entanglement; and also the concept of faster-than-light travel. We’ve been discussing here on MK how consciousness may be able to travel faster than light. How our thoughts may therefore not be subject to Einstein’s Theory of Relativity. But what is being used to transport those thoughts from one part of the universe to the other? Could Dark Matter be the medium of mediumship?

Research carried out by two physicists from Baylor University may provide an answer. Dr. Gerald Cleaver and Dr. Richard Obousy have come up with a new theory. One that would enable faster-than-light travel without violating Einstein’s theory; by harnessing Dark Matter and utilising string theory. String theory tells us that what we think of as ‘reality’ is made up of 11 dimensions. They say the 11th dimension holds the key to faster-than-light travel.

By manipulating Dark Matter in this 11th dimension they could create a ‘bubble’ of dark energy – the same energy that caused the universe to expand right after the Big Bang. If this ‘bubble’ was behind say, the starship Enterprise, it would expand space behind the ship and shrink space in front of it, propelling it forward much like surfer rides a wave at infinite speeds. But here’s the freaky bit – the ship would not actually move even if Captain Kirk ordered Warp Factor 8 – it would be space and time that moved!

The exciting thing about this theory is that it does not violate the Theory of Relativity and may also explain why Quantum entanglement works leading to the question: when we entangle a goal do we move towards it or does the universe move into alignment to bring it to us? I believe it may be a combination of both and by Quantum Creating we may be unwitting manipulating Dark Matter and moving space and time without realising it to bring about the reality we want. As we discover more about what constitutes ‘reality’ and our universe, who knows where it can take us.