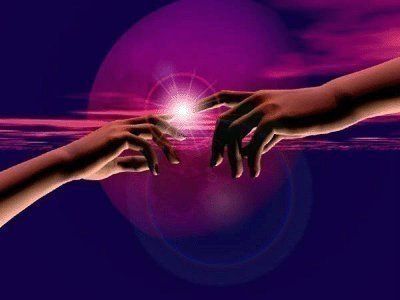 Empathy – the ability to ‘tune in’ or experience another’s emotional state or pain, is a key to not just psychic development but to our spiritual development – whether we consider ourselves ‘psychic’ or not. Let’s say someone close to you accidentally hits their thumb with a hammer. Chances are you react in much the same way they do – you may wince and even say ‘Owch!’ (or worse!) at the same moment they exclaim in pain. Although you are not the one who is injured, you may even feel a little pain yourself. Similarly, if a friend is extremely emotionally distressed although you are not the one who is upset you may find yourself identifying with their emotions and even crying as well. Why? Neuroscience has the answer.

Recent scientific studies have shown that seeing other people touched activates sensory areas in our brains as if we are experiencing the touch ourselves – that we literally ‘feel with’ others. Giacomo Rizzolatti and his team at the University of Parma first discovered ‘mirror neurons’ two decades ago – the neurons in our brains which allow us to understand other people’s actions by firing off the ‘mirror’ cells in our brains which would control the actions if we were performing them.

Now a group of scientists led by Dr. Christian Keysers has advanced this study by getting participants to watch short film clips of people being touched while using functional magnetic resonance imaging (fMRI) to record their brain activity. The scans revealed that the somatosensory cortex, a complex of brain regions processing touch information, was activated during the films – although participants were not being touched at all. This year another study conducted by Professor Michael Schaefer of the University of Leipzeig found that this ‘mirroring’ is linked to how ‘empathic’ we believe we are. After monitoring participant’s brains while they watched clips of hands being touched, those taking part were then asked to complete an Interpersonal Reactivity Index (IRI) test which measures four specific ways in which we empathise with others. Not surprisingly, those who scored the highest on the IRI had also reacted the strongest to the film clips.

This not only suggests we are truly all connected but that our brain’s mirroring  responses are in fact associated with our personal empathic ability. How much you empathize with other people seems to reflect how strongly your brain—your primary somatosensory cortex—“feels with” them when you see them being touched. Spiritually, the more we open up ourselves to understanding others the more ‘empathic’ we become. Whether we want to use this to further develop our psychic abilities or just to emotionally connect on a deeper level with the world around us – all we need to is imagine we are reaching out to touch someone and our brains will do the rest.