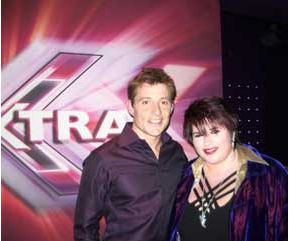 Recent news that presenter Ben Shephard has quit ITV’s GMTV came as a blow to everyone who loved to start the day with his take on all the current events.

Reports say that Ben Shephard will continue to present the show until the end of summer, when he will be replaced by Adrian Chiles, but what’s next for Ben?

I first met Ben Shephard several years ago on the first series of X factor Xtra . He sat down next to me and said he wasn’t convinced by astrology so what sign did I think he was?

Now, like most astrologers I don’t like this kind of question as astrology is all about your complete chart, not just your sun sign.  Having said that, I found myself saying, “Sagittarius” without even blinking.  His jaw dropped open and he said, “That’s the first time someone got it right.”

I then looked up his chart in front of him and it turns out the reason this was so easy to intuit is that Ben has five planets in Sagittarius, making him positively loaded with Sagittarius energy which has probably got him through the past few years of the kind of early starts that would break most of us.

Sagittarians are free thinkers, vibrant and filled with energy. After our initial meeting I met him for about three more series until he left and indeed what always struck me about him is that he treated everyone equally, always chatted to everyone  and was a charming bundle of positive energy.
After his name hit the headlines again recently, I thought I would look up his astrology chart and see what will drive this new change of direction. Two things jumped out.  The first was that his Chiron is square Mars, which means his heart will rule his head from now until December 2011 and he will want his career to go in the direction of his heart’s desire, although it could also mean a problem with someone in authority. Also his Mercury is sextile Jupiter, indicating that his overall happiness is more important right now that old commitments.

He has the passion and commitment to push himself to the next level and he also might have an opportunity in another country, such as the USA. I have no doubt that he will go from strength to strength but could encounter a power struggle with a man that needs to be handled delicately on his route to what I feel is far greater fame than he has had to date.  With his Sun Venus, Mercury, Neptune and Mars in Sagittarius, when Ben moves he flies so I am sure this next career phase will work out better than even he could hope. With his heart of gold he deserves to do well.