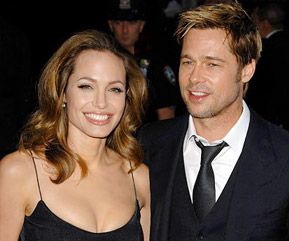 Brad Pitt is rumoured to be not only seeing a psychic but also practising a form of meditation and channelling. We often hear rumours in the press that prey on celebrities’ private lives. Seeing a psychic is a very private thing and a good psychic will be totally confidential when it comes to their clients. As Brad is in the news I thought I would have a quick look at his chart to see if he does have any spiritual leanings.

Brad is a Sagittarius with Sagittarius ascendant.  This makes him an explorer.  He loves to travel and has an adventurous spirit. He will ask himself deep rooted questions about the meaning of life but the rest of his chart, with Moon, mercury, Venus and Mars in Capricorn, shows someone who is very down to earth.

Mercury trine Pluto makes him very intense and probing and he is fascinated by the meaning of life and death.  If he is seeing a psychic, however, it will be someone he trusts implicitly as he is a good judge of character. Brad is driven by his career and his relationship and is loyal but stubborn as hell. Having a relationship with someone with all that Capricorn is certainly challenging as when he puts his foot down he is an immovable object. With Moon conjunct Venus he is loving and charming, but Mercury in Capricorn make him impossible to change and he finds it hard to admit when he is wrong. He does take his responsibilities seriously.

On the other hand, Angelina is a free spirited Gemini.  With her Mars and Moon in Aries she is also uncontrollable, but she has craved stability in her life.  Her Venus in Cancer and Cancer rising make her vulnerable in relationships and she needs to know where she stands.  You don’t get more stable (or stubborn) than someone with four planets in Capricorn, as in Brad’s chart, which is why the relationship has lasted this long. She is complex but Brad is a sticker. I bet they have some real tempestuous arguments.

Angelina is the epitome of Yin and Yang.  She is totally feminine and totally masculine Mars in Aries makes her powerful and Venus in Cancer makes her vulnerable. Having both those qualities make her enlightened but contradictory. Both of them will want to explore their spirituality and always be intent on making this life count.

Brad’s spirituality and love for the world comes out in a practical way (like rebuilding parts of New Orleans with his bare hands) and both of them are intent on making the world a better place. I for one salute them. Personal freedom is important to both of them and I hope that they are left in peace to pursue their relationship and their spiritual path.