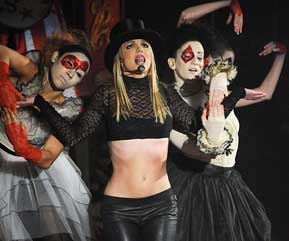 Britney has landed in the UK where she gave a superb – albeit lip synched – performance. Other than that she refused to engage with the audience. Like a Stepford pop Princess, she gave a perfect show.

Britney is monitored all the time and, like a performing tiger, closely guarded but kept in a locked cage, just like the gold cage she sings in. Her father and manager have full custody and she is allegedly not even allowed to make phone calls.

‘I know why the caged bird sings’ – Maya Angelou

Watching the Sky documentary ‘The Hunted” with Britney, my heart went out to her. She has the energy of a beautiful, endangered animal caught and thrown into a zoo. A vulnerable woman who is allegedly not fit to make a phone call is being forced to perform all around the world. How can you say it is not forced if she is not even allowed to choose her own friends, leave the house or make a phone call? If she is that mentally unfit, this tour is indeed a circus of a darker kind!

Let’s look deeper at the real Britney Spears through her astrological chart.

Sagittarian Britney has Sun, Mercury, Neptune and Uranus in Sagittarius, making her unique, unpredictable and philosophical. She thinks very deeply about things but equally can be wild and changeable. Other people could think she’s a bit nuts, even when she is totally herself, as she has so much energy and changes course easily. Those born under the sign of Sagittarius are famous for being blunt or putting their foot in it when speaking. They talk without thinking and rarely judge the consequences of their behaviour as they are a natural free spirit. With such a stellium of planets in Sagittarius Britney is unlikely to ever be able to stop that.

At her best she is enthusiastic, generous, warm, passionate and spontaneous. She also has the ability to be ahead of her time musically. Fortunately, she has unstoppable energy and travel enlightens and inspires her. She should feel comfortable with travel and at home while on her musical odyssey. Mind you I like chocolate but I wouldn’t want to be force fed it everyday!

‘I go through life like the Karate Kid’ – Britney

She has Mars planet of action, sex and the father in perfectionist Virgo. She craves perfection and is very hard on herself. She might have felt or feels that her father expects her to be perfect and she is never good enough. Ironically, the symbolic meaning of Mars in Virgo is the virgin and the whore. When giving a reading if someone has Mars in Virgo it normally means they have times of wild over the top sexuality and then times of celibacy and also mixed feelings and guilt around sexuality. The soul lesson is to find the balance between these two extremes.

Venus, the planet of love, is in serious Capricorn. This tells us she will often have relationships with people connected to work and that she needs someone stable and hard working (she doesn’t seem to have found this yet even though she is allegedly dating her manager). There is great hope in her chart that she will find a stable soul mate who will be her rock and her roots and this is when we will see the return of warm, loving Britney.

Britney’s ability to appear detached comes from the Moon in Aquarius. This makes her creative but when in crisis she cuts off her feelings and appears an ice maiden, shut down within her perfectionism and feeling on the outside looking in. It also means she needs emotional freedom. Just like Maya Angelous book title ‘I know why the caged bird sings’, Britney has to sing. It is probably the only thing keeping her going. It is just a great shame that the people who are legally saying she is unfit are making millions of bucks off her back. Take heart though Britney; it will not always be this way….