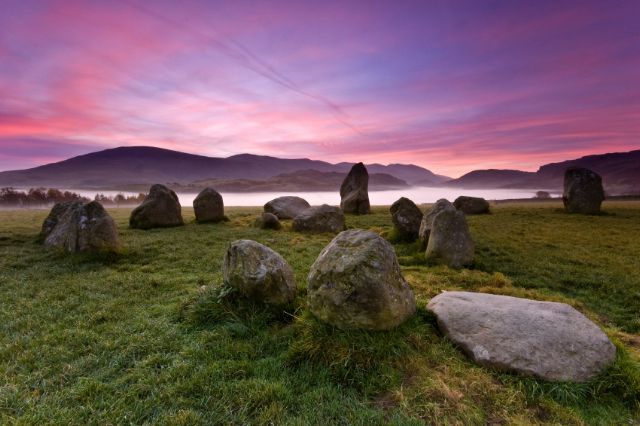 From the magnificent Colossi of Memnon in Egypt to the awe inspiring Ayers rock in Australia, there are countless legendary sacred sites across the world that many of us might hope to see during our lifetime.  There are also hundreds of sacred sites throughout England, Ireland, Wales and Scotland that are just as important in terms of their spiritual significance, however, and well worth a visit – especially as they are much quicker to get to as many might be on our own doorstep!

Taking a whistle-stop tour from top to bottom, starting in Scotland, the Callanish stones circle a burial chamber on the Isle of Lewis and date back to an amazing 2900-2600 BC.  Over on Orkney, The ancient Ring of Brodgar is actually a henge and is clearly marked with runic graffiti.
Moving just across the border into England and set on Northumberland’s stunning coast, Lindisfarne, or Holy Island can be found.  It’s a strangely peaceful island that holds the ruins of an old monastery and is regularly cut off from the mainland by the sea, so time your visit carefully!
Over at Keswick, in England’s Lake District, Castlerigg Stone Circle, known by locals as ‘The Druid’s Circle’, consists of 38 stones set in a 30 metre diameter circle and is well worth a visit.

Much further down in Wiltshire stands Stonehenge.  Here Druids celebrate the summer solstice each year, whilst across in Somerset you’ll find what many call the New Age capital of England – Glastonbury.  Glastonbury was made famous because of its connection with Avalon and the Arthurian legends of the Holy Grail, and there the ruins of the Christian Abbey can be found alongside the mysterious Glastonbury Tor and Chalice Well.
If you fancy your sacred sites on the more rugged side, you can skip over to Wales and visit Carn Ingli, literally translated as ‘Mountain of Angels’.  You could also try spending a night in the rock seat of St. Idris on Cader Idris mountain at the Southern end of Snowdonia national park if you dare as the story goes that if you do, you’re in danger of dying, going mad or becoming a poet!

Down at Penzance, generations of pilgrims have made their way to St. Michael’s Mount as it is said that Archangel Michael once appeared there.  You’ll also find many Megalithic sites where huge stones mark sacred areas on the land.

Over on Ireland, in the Boyne River Valley, north of Dublin, you’ll find Newgrange.  Dating back some 5,000 years, this impressive burial ground hosts ancient carvings and is said to have been built for the Sun God worshipped in pre-Christian Ireland.  If you’re feeling fit you could always follow the footsteps of the million pilgrims said to make their way each year to the top of the holy mountain Mount Croagh Patrick, out in County Mayo.

These are only a handful of the hundreds of sacred spots that could be listed, but we thought we’d ask you – which sacred places are close to your heart and where would you recommend a visit?  Tell us about the sacred site on your doorstep, or your favourite spiritual place and why you love it!