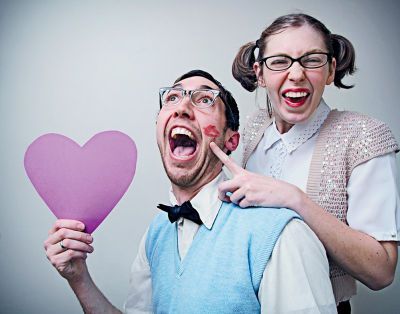 People often have psychic readings to find out if love is in the air, either because they are single or have their eye on someone and want to know if a possible romance is in the offing.

There are a few tell tale signs that someone is attracted to you.   If they make excuses to be around you and get talking, or show an interest in what you say, even when you are talking about your passion for something really obscure, it’s usually a big clue.  If they remember that you take two sugars in your tea or that you are allergic to cats, that means they are paying a lot of the kind of attention that bodes well.

If they ‘just happen’ to turn up where you go, or have tickets for something they think you’d like to see, that’s a huge hint. As are any compliments slipped into any conversations!

The biggest clue is if they get physically close.  They may not be aware of it, but if they always gravitate to your side, it’s a great sign.  Also, if their hand wanders over to brush your hair or touch your arm, they are letting you know they like you.

There are always exceptions to every rule, however.  Someone might have a huge crush on you and keep it top secret if they aren’t sure if you feel the same, or if any kind of personal displays don’t fit the place you usually spend time with them.

Something that came out of a test reading for one of the psychic readers who went on to join my team is a brilliant illustration of this.  During the test reading, the psychic gave the name of someone she then went on to describe in a way that meant the tester recognised him.  So the psychic scored for that.  But the psychic also told the tester that this man was attracted to her.  That was something the tester couldn’t verify.  He’d never given any indication whatsoever.  They trained in the same sport, and everyone was too busy during training sessions for anything else.  And in fact, he then disappeared for a couple of months.

He did reappear, however.  By then, my tester found herself alone with him and he took that chance to reveal he’d fancied her right from the start and they ended up dating.

Sometimes the clues that someone likes us are obvious.  Sometimes they aren’t, and it takes someone else to point them out.  So if you’re single and going through a dating dry spell, there could be someone right under your nose who would like to get a lot closer.  See what happens if you open yourself up on an energetic level to that being possible, and they may very well magically appear from the woodwork.