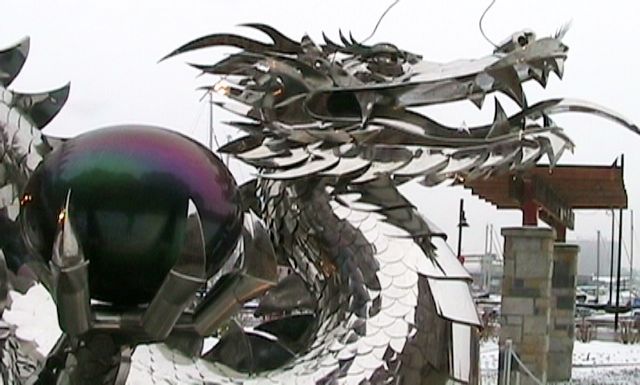 According to Chinese astrology, the New Year that starts on January 23rd and runs until February 9th 2013 is the year of the Black Yang Water Dragon.  Alongside the news about Neptune taking up residence in his spiritual home of Pisces in February, this should have you clapping your hands and turning cartwheels if you can!

In Chinese symbolism, dragons are both lucky and brave.  They are wild and bold creatures, first to fly off at the sniff of something exciting on the horizon.  They can however be just a little bit fiery and impulsive and this quality is underscored by this being a yang dragon.  That makes the added element of water extremely good news as it cools this dragon’s temperament, slows it down slightly and gives it the ability to go just a little bit more with the flow.

All in all, that means that 2012 is a year of optimism and heading for the heights without having to burn any bridges along the way.  According to Chinese astrology, if you’re the kind of person who usually talks themselves down from their dreams, you can catch this dragon’s tale and soar on his energy.  At the same time, if your friends, family or partner usually watch your antics through hands clapped over their eyes and you always end up tussling against anything that feels like a drag, you’re going to be a lot more inclined to think things through and weigh up the consequences and also will be a lot happier about giving way sometimes.

No wonder it’s considered a good year in which to get going on business ideas or even make a commitment within a relationship.  The high point will be the Dragon Moon that takes place from May 20th – June 18th.

So how do you harness this particular dragon?

1/ Understand that optimism is a choice in the way you see things.  The glass is half full and half empty, but you’re the one who decides how to see it and that has a huge difference on your mood.  Embrace this dragon by focusing on the positive.  You’ll be retraining your brain to look on the bright side.

2/Be spontaneous!  If you’re a natural dragon, I’m sure you do an awful lot of it anyhow, but if you aren’t open up a few little gaps in your life where magic can seep in.  As far as Quantum Creating  goes, this is an absolute must as nothing dulls your psychic energy like going through the same routine day in day out.  You don’t have to pack your bags and leave a post-it note on your computer screen for your boss saying that you’re heading to the Himalayas.  If nothing else, set aside one morning or one day where you’re absolutely not allowed to do anything you’d usually do. Wear fancy dress all day or take your lunch to a nearby park or take a tap dancing class.

3/Get going on your dreams.  No more tweaking whatever it is until it’s absolutely perfect, or talking about how hard it is or how you never get the breaks.   You don’t have to be reckless and launch yourself into something in a way that rips the ground away from beneath you.  Make a plan to do one thing each week towards making a dream come true.

4/Stretch yourself.  This is the year to take steps, even if they are baby ones, that you might usually hang back from.  Strike up a conversation with a stranger who looks interesting, join a choir or take a class if you’ve always wanted to sing or look around for volunteer groups that you can join in an area that you’re passionate about.  Imagine you’ve got dragon wings and use them to soar beyond your usual life into something truly inspirational.