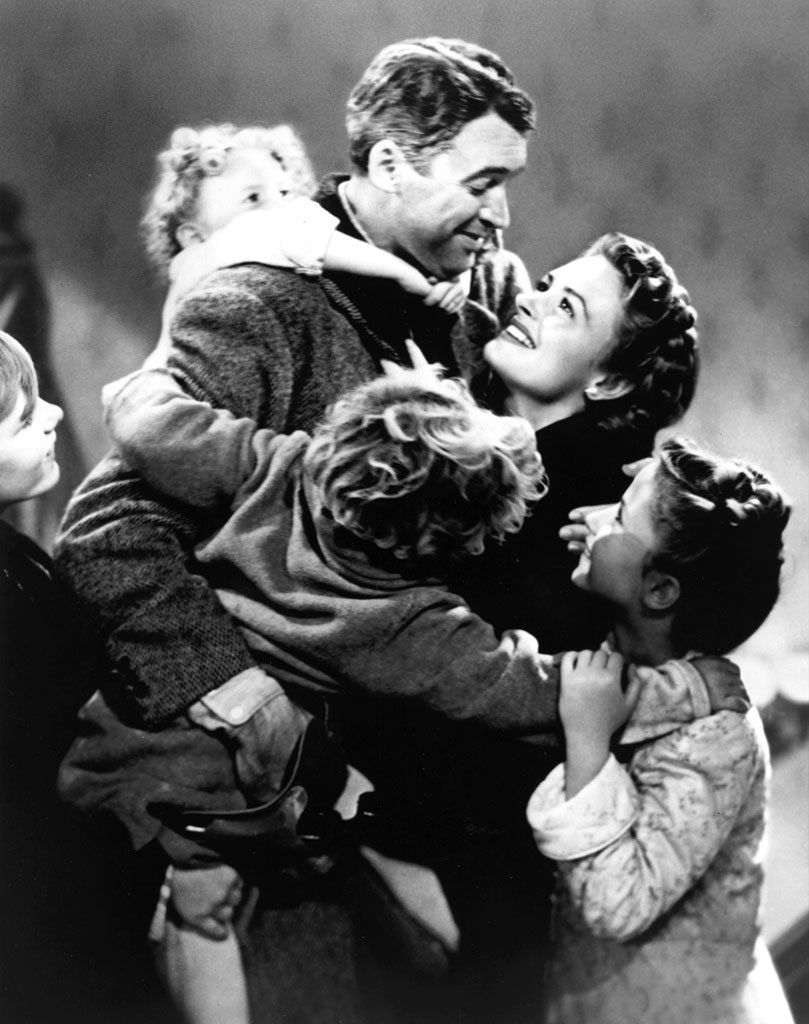 Image shows a scene from ‘It’s a Wonderful Life’.

I absolutely love watching a good film and there are a fair few out there that pack a powerful message in an entertaining package.  If you’re looking for an hour or so of inspiration, pick any of the titles below.

If you’ve ever doubted that you have an important place in the universe, It’s a Wonderful Life, reminds you that you are crucial to the whole in ways that you just can’t imagine.  I make a tradition of watching this 1947 black and white Hollywood classic every Christmas.  George Bailey has lived all his life in a small American town with his wife and children where he runs a mortgage loan company.  A mix up means that an urgent deposit never makes it to the bank and George realises it could lead to the town’s collapse.  The whole story takes place on Christmas eve, when a distraught George decides to kill himself and is saved by the intervention of an angel called Clarence who shows him what would happen if he wasn’t in the world.

There are so many fantastic messages in The Wizard of Oz it’s hard to narrow them down.  If you ever doubt that all the power you need is inside you, this is the film for you.  A cyclone tears young Dorothy and her dog, Toto, away from Kanzas and propels her into a strange land where she is told that she must journey to find the Wizard to get home again.  Along the way she meets three unusual companions and they travel together, encountering extraordinary adventures where each of them are challenged to find a power inside they never thought they had.

If you’re feeling stuck in your own life, Groundhog Day could show you the way out.  Jaded TV meteorologist Phil Connors gets snowed in with his crew in a small US town where they have travelled to report on the annual Groundhog Day celebrations on February 2nd.  He wakes up the morning after they have been forced to extend their stay to discover that somehow they are all stuck replaying the events of the day before.  Phil is the only person aware of this.  No matter what he does, he is always woken in his own bed the next morning by Sonny and Cher playing on his clock radio to discover that it is still February 2nd.  At first he struggles with trying to change his fate then, as he realises that nothing he does has any consequences, embarks on a hilarious and all too human orgy of greed, despair and exploitation of his situation.  Eventually he submits to his fate and allows himself to be transformed into a better, less selfish person.  It’s at that point that the spell breaks, and he wakes up on February 3rd to discover all that he has ever wanted but never been in the right place to attract is now his.

Many people want to lead a life that leaves the world a better place, but do you have to do anything radically different to what you are already doing to achieve that? Mr. Holland’s Opus tells the story of a young would-be composer, Glen Holland, who takes a job teaching music to tide him over whilst he works on the symphony he hopes will catapult him to artistic fame and fortune.  When he begins his teaching career, his frustration at having to be diverted from what he feels is his true calling is all too clear to his students and he becomes bitterly resentful that he can never find the time for his own work.  Thirty years later, when the teaching programme is cut and he loses his job, he wonders whether he has wasted his entire life, but there is a final and totally tear jerking moment where he gets what it was all about.

If you have lost someone or want to explore what life after death may be like then What Dreams May Come is the perfect film – but bring your hankies. Dr. Chris Nielson rushes to answer a cry for help from his wife Annie from whom he has been estranged since the death of their two children.  On the way he is killed and enters a surreal and technicolour afterlife that seems modelled after his wife’s abstract paintings.  A being called Albert helps him find his way through this strange territory through many events that help him reconcile his past.  Back in the real world, Annie is dying, but when she crosses over it is just the beginning of yet more challenges that must be faced before they can be reunited.

I hope you enjoy these films and would love to hear of any more that you feel deserve a place on the must see spiritual list!

Watch trailers or clips from the movies

The Wizard of Oz

What Dreams May Come

And just for fun, here’s the trailer for the 2010 remake of the 1980’s film, Karate Kid – a classic interpretation of the Hero’s Journey in modern film.