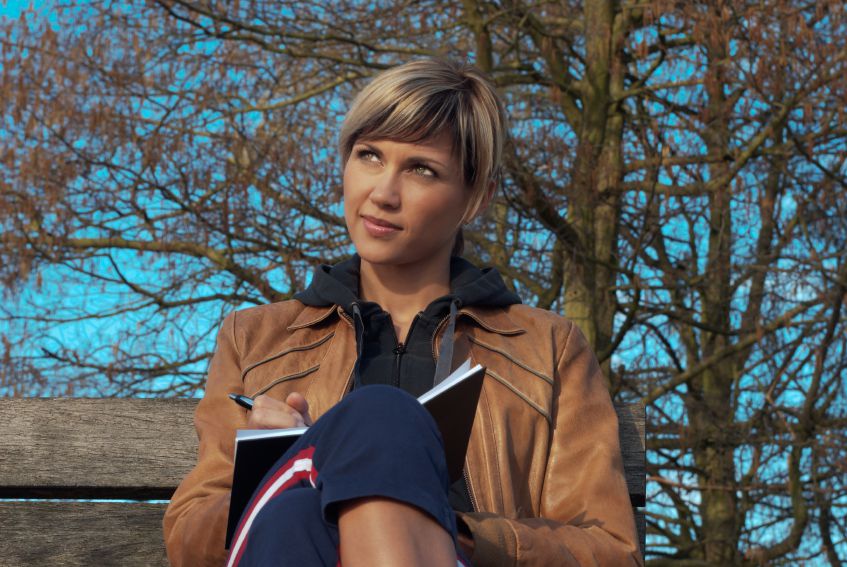 Ever found yourself idly doodling and then looking in surprise at the intricate drawings or symbols you’ve produced? You’ve actually been practicing a form of automatic writing.
It’s said to work through channeling. This means going into an altered state which supposedly allows another source of energy or spirits to direct the movements of the hand holding a writing instrument, such as a pen, or even the movement of hands over a typewriter keyboard. Doodles, symbols or images also count as automatic writing if they are produced in that altered state.

Higher self or spiritual connection?

The debate as to what’s actually happening during automatic writing turns around whether it happens as a result of connecting with spirits, tuning in to the unconscious or switching from right brain to left brain activity. In my mind, psychic development is about setting a specific intention to enhance our connection with the quantum field. This contains everything from the past, present and future. Having said that, the quantum soup is heady stuff and, as with any other mind expanding exercises, this is something you shouldn’t try unless you are feeling totally grounded, well and settled in your life – and you should stop immediately if you feel uncomfortable in any way!

19th century French Psychic, Hélène Smith, captivated the surrealist’s imagination and earned the title ‘the Muse of Automatic Writing’. ‘Georgie’ Hyde Lees, wife of poet William Butler Yeats, claimed to be able to do it. Most famously from this era, Helena Blavatsky, founder of the Theosophical movement and author of the spiritual classics, ‘Isis Unveiled’ and ‘The Secret Doctrine’, said that she produced her work using the technique.

But does it work? The Glastonbury Abbey story!

At the risk of compromising his professional reputation, architect Frederick Bligh Bond, appointed director of excavations in 1908 at the ruined Glastonbury Abbey, admitted that a man named Bartlett had tutored him in the automatic writing he then used to locate the foundations of the demolished eastern chapel. In his 2008 Channel 4 series, Tony Robinson and the Paranormal, presenter Tony Robinson investigated the story and was himself coached in the technique. He asked the question, ‘What was the name of the medieval monk that Bligh Bond and Bartlett were connecting with?’ and picked out the words ‘Wallace’ and ‘Angel’ in the consequent scrawls. To Tony’s evident amazement, later research revealed a medieval document written just after the Romans had left Britain that described how St. Patrick visited Glastonbury and discovered 12 monks living as hermits. One, named Wallace, journeyed to the top of the Tor with St Patrick where an Angel helped them decide the location of where the Eastern Chapel should be built.

Two of the key New Age written work series were produced through automatic writing. US clinical and research psychologist, Helen Schucman channeled A Course In Miracles and Neale Donald Walsch published his question and automatically written answer series in the global bestseller, ‘Conversations with God’.

How it’s done and what to use it for

You can use a pen or pencil and paper, or even a typewriter (although you won’t be able to doodle if you do this!). Pick a time and place where you won’t be disturbed. Focus your intention using three deep breaths in and out. You can form a specific question in your mind, as Tony Robinson did, or ask for general help or guidance. Relax and allow what comes to flow. Afterwards, bring your attention back fully to the present moment and give yourself a shake to totally connect with your body. As with any other skill, you will find it easier over time and may become more fluent in what you capture. If you find that you have drawn symbols or pictures, you might have to do a bit of detective work of your own to discover what they might mean!

As always, I like to end with a way that you can use your developing psychic skills to become the magician of your own life. If you have a particular ambition or goal, automatic writing can help you chart your course to achieve it. Write a heading that describes what it is you want – such as ‘How my novel became a bestseller’ or ‘How I opened a specialist bakery’ as this helps set your intention. Then go through the process above and see if you can capture the story of how you took yourself towards the realisation of your own dream.

Automatic writing involves going into an altered state to produce words, sentences, pictures or symbols.
Only attempt it if you are feeling well, grounded and happy in your own life and stop if it feels strange in any way.

You can use an old fashioned pen and paper or a laptop.

Clear your mind, set your intention and follow the natural movement of your hands.
When you become more fluent, you can use it to ask for guidance, information or as another tool in creating your future.