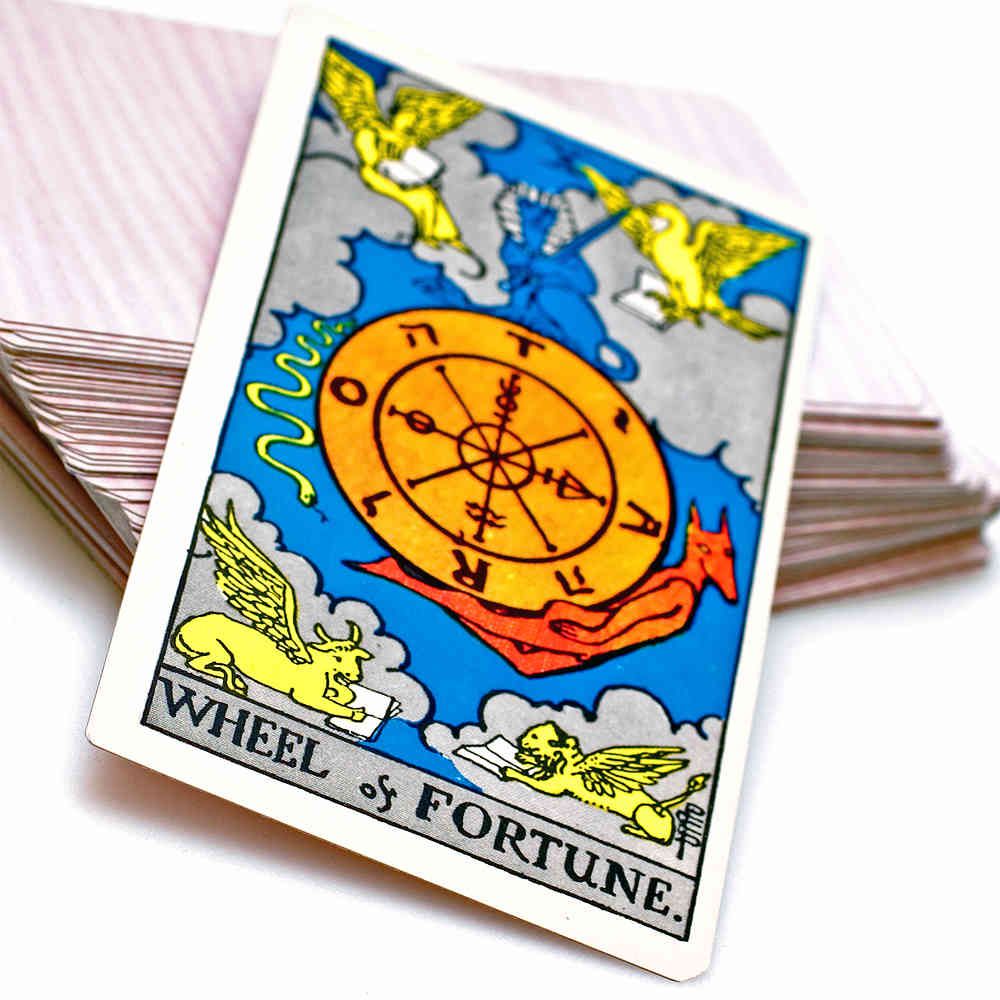 I want to start this series on 21st century psychic skills with a very simple three card spread. However, this approach is all about using familiar tools or psychic skills in a way that puts you firmly in your power; and helps you embrace your role as a co-creator in your life.

You can use any deck for this.

Shuffle the cards as you normally would, focusing on any question or issue. When you feel ready, lay out three cards side by side from left to right.

If you use this spread, you’ll know that the card on the left refers to the past; the middle one to the present, and the one on the right to the future.

Usually, if you saw this kind of spread, you might think, oh no and then be tempted to hide under your duvet for the next six weeks.

But this time, I want you to look at them totally differently.

The ten of swords

Being the eternal optimist that I am, I always look at this card and think, well, the good news is that it’s not going to get any worse!

It is usually interpreted as meaning that something one hundred per cent over. In addition, someone has been totally stabbed in the back to boot.

Instead of just shuddering and moving swiftly on, pause.

Perhaps you have had a time when you were totally stabbed in the back. Or maybe you were the one who felt compelled for some reason to stick the knives in; and push something towards a dramatic end.

The really important question from a manifestation point of view, however, is; why out of all of the cards, has synchronicity drawn your attention to this one?  Could it be a hint that this experience is lurking in your energy or psyche in a way that you need to pay attention to?
The presence of the Queen of Swords might suggest it does.

The Queen of Swords

The Queen of Swords has many amazing qualities.  She’s independent, fast thinking and quick witted.  But in her shadow she is a bit distant and sometimes even cold.  Somewhere along the line, she’s lost her human touch.  She isn’t above resorting to skulduggery and she can lose her temper and be really cutting with her words.

Swords are ruled by the element of air, which also relates to thought or mental energy.

So far these two cards have given us a huge amount of crucial information.

From a 21st century perspective, they suggest that somewhere in the past something happened that is still having an effect today.  It suggests that you have cut yourself off from your heart; and made what probably felt or feels like a safe retreat into the intellect.  You can do a lot from there; but it can also be a cold and lonely place that can nudge us towards unnecessary cruelty to ourselves and to others.

Then we look at the future – the Devil himself.

The Devil rules the material world and he is the master showman of deception and illusion. He usually refers to addictions, control and manipulation and the pursuit of power for its own sake.

Even though seeing that card in your future is enough to give you the wobbles, it’s not all bad.  The Devil can’t do anything to you.  All he can do is deceive you  But the second you see through his magnificent illusions – poof!  He’s gone.

So all in all, this spread suggests that something from the past is still playing out in the present. It’s nudging you towards playing out your darkest side in the future.

It could mean that you are dealing with someone who is still nurturing some kind of hurt or betrayal; and is making them behave in a negative way and the volume is about to go up.

And that’s where you can step in and do something about it!

What if this spread refers to you?

It’s given you the clear message of where you stand in your power right now; and what kind of experience in the past has informed that and where it is taking you.

As a result, if you can go back and release whatever is still clinging on from that experience in the past, you can transform who you are in the present, and you will change your future.
There’s all sorts of things you can do.  You might go and talk to a good therapist, get some shamanic healing, send love back from your present to that you in the past, do forgiveness and letting go meditations, devise your own release ritual and ceremony.  The most important thing is that you decide that you are not going to be stuck with what has gone before.

And what if it refers to someone else?

You still have the power to transform the situation and there’s absolutely no need to march in for a showdown with them.  To begin with, because we are all one, all you need to do is change yourself and they have to change.  They might be triggering old patterns in you that make you revert to a trembling child or rebellious teenager instead of an adult who is so beautifully in their power that they can lovingly hold boundaries with no judgement.

In my book, that makes them a kind of soul mate, someone who has come into your life to help you into your soul power!  Their gift to you is that they have shone a light on what within you still needs to transform.  Along with any work that you do around that (and see the above paragraph for a few suggestions), you can visualise them healing, send them love, visualise the situation turning out totally differently.

This site is absolutely packed with articles and videos that will give you powerful approaches to transformation so that you aren’t a helpless, passive recipient of a future that fills you with dread.

I really do hope that’s thoroughly whetted your appetite and convinced you that psychic skills and divination tools give us the starting point for using our abilities and powers as co-creators.

Please – ask me any questions you like so that I can put together articles like this that will really help you step into your own power.