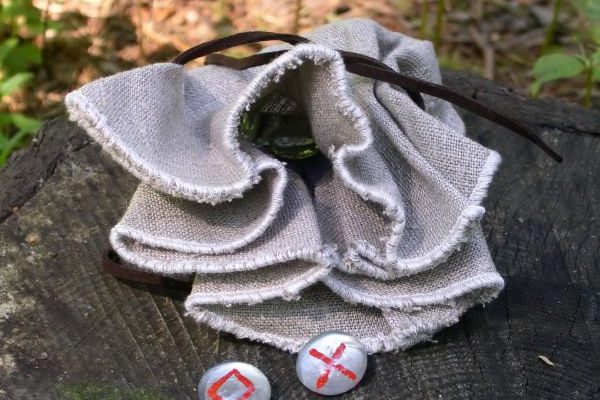 Runes are fascinating ancient symbols that can be used for magical and divinatory purposes.  They are the legacy of an early writing system that was used for Germanic languages, dating back to around 150 AD.  A number of different rune systems were developed, but they began to be replaced by the Latin alphabet that we use for writing today around 700 AD. I love their ancient history and think they are a fab way to tune into our unconscious and inspire our spirit.

Legend has it that runes were a sacred gift to mortals and were first given to the Norse God Odin after he wounded himself with a spear and then hung himself from Yggdrasill, the World Tree for nine days.  Odin’s ordeal is described in full in the epic poem – Havamal – supposedly Odin’s own words.

The word rune means ‘secret’ or ‘something hidden’ and plenty of evidence dating from the Roman and Germanic Iron Age shows that they were used for magical purposes from the start.  Runes appear on amulets, where it is thought they were carved to act as charms.  A 6th century warning on a monument from a ‘Master of the Runes’ (known as an erilaz) warns that he has hidden powerful runes within the monument itself that will bring death and destruction to anyone who damages it!

For centuries runes were only known and used by the elite few and surprisingly only really began pass into popular use around the 80’s.  Around that time a whole series of books, cards and rune sets revealing how they could be used for divinatory and magical purposes began to make their appearance in specialist shops. Many people starting their psychic path use Runes for inspiration.

For divinatory purposes, they work a lot like the I-Ching in that they are usually stored in a bag and then drawn out one by one or cast on a flat surface where they can be ‘read’.  If you want to see how this ancient Oracle system works in practice, check out the free rune reading on this site and let me know what you think!