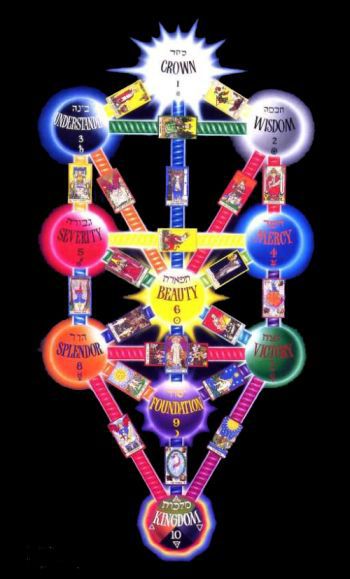 Many people are put off studying the Kabbalah due to a perception that it is difficult to understand. However, if you are interested in soul matters, understanding our universe and Tarot and astrology, then the Kabbalah marries all of these as it encompasses astrology, numerology, dreams, sacred geometry, quantum physics, healing, meditation and of course – the Tree of Life.

The Kabbalah is thousands of years old and one of its most important texts – called the Sefer Yetsirah or Book of Formation talks about the effects of the planets on us. It has been attributed to Abraham which would mean it dates back to the eighteenth century CBE! The Talmud teaching states that ‘Abraham had great astrology in his heart’ and the Sefer Yetisrah talks of the universe and the soul in astrological terms.

All the major arcana of the Tarot correspond to an astrological sign or planet and the major arcana were traditionally supposed to have been handed to us by the Archangels according to Kabbalistic teaching. At the heart of the Kaballah is the Tree of Life – a diagram which has been referred to as ‘the DNA of the universe’. The Tree of Life contains simple letters each of which link to a planet or rulership just like an astrological chart. The tree is made up of 10 spheres plus one that is emerging, known as the Sephirot, held together by universal law in three columns. There are 22 paths connecting the spheres but there are other, hidden paths. It is a map of the universe and contains everything that has ever come into existence or will be created which emerge from Kether (the crown or source), which today we might look to as being symbolic of the Big Bang.

While the Kabbalah includes astrology and the Tarot, using these just for prediction is against Kabbalistic teaching. Rather, they are tools to understand the spiritual potential that is inherent in every situation. The Kabbalah tells us our souls return again and again as we move through the whole tree at which stage we have become one with the divine. It is also emphasises free will as by understanding ourselves better by using astrology and Tarot symbolism, all our energy can then be positively channelled in ways that benefit ourselves and others. Kabbalah insists that we learn to deal with who we are and what we can accomplish before we can even begin to think about spiritual issues.

If we are to believe in theories such as the Unified Field Theory and the Holographic Universe, that we are a part of the divine, then the teaching at the heart of the Kabbalah – to understand the purpose of our lives so that ‘God will behold God’ makes perfect sense. The understanding we are creators of our world and using this knowledge in a way that teaches responsibility and awareness, is what the Kabbalah offers. It really is ancient wisdom that is as relevant today as it was thousands of years ago.

2 thoughts on “Where Soul, Astrology and Tarot Meet – the Kabbalah”