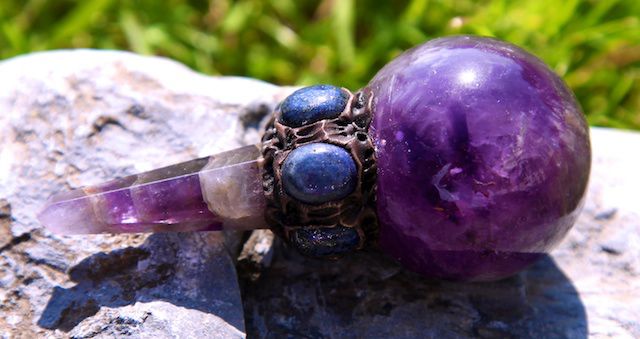 Wands are traditionally used to amplify and focus your intention and psychic energy.  They are said to be good to draw protective circles or sacred shapes as part of rituals and some people use them in healing energy work where again they may just be pointed at a particular area or may be pressed against certain points, as during a session of acupressure.

Clear crystal is believed to be fantastic for amplifying and transmitting energy.  It doesn’t have to be perfect and polished for you to use it as a wand. Look out for it in its more natural form as you can buy it in longish shards that have a point at either end and you can use it just like that.

Alternatively, you can buy more ornate wands or even make your own.  Here is the simplest way to make a crystal wand that doesn’t involve you having to have any
silversmith skills.

First, decide what crystals you want to use.  You might do some background research into all the hundreds of different types of gemstones that there are and what properties they are believed to have as this will help you decide which ones to choose.  You might simply walk into a crystal shop and allow yourself to be drawn to certain gemstones, but this is one time that a bit of research could come in handy.  Fluorite is associated with opening up your psychic visions and in my view is a powerful stone that should be used with care, so if you decided to put that on a wand and press it against someones third eye, the chakra also associated with psychic intuition, you might encounter a few unintended consequences!

You’ll find a few articles on this site on crystals and in my view Judy Hall’s book, The Crystal Bible is a brilliant place to start if you want to learn more.

When you have selected your crystals, you need to cleanse them.  I think the simplest way by far is to hold them in your left hand under running water (a kitchen tap is fine!) and say out loud, I dedicate you to my good and to the highest good of all.

Then you need to get the wand itself.  If you can, go out into nature and look for interesting shaped sticks.  They don’t have to be long or perfectly straight, but it’s important that you allow your psychic intuition to draw you to the right piece. As with crystals, each tree is said to have its own magical properties. For example, Oak is believed to be masculine in energy and is associated with courage, endurance, strength, sacrifice and liberation. You can either research first what kind of wood you want to find and go looking for it, or you can go to a forest and see what nature gives you.

The best possible time to get good, fresh wood that isn’t already decaying is after a storm and some swear its the best time to go hunting anyhow as the wood will be already charged up with the power of the storm itself.  Remember to thank the trees for their bounty before you take it.

You can sand the wood and feed it with orange oil to keep it supple.  Then take your crystals and decide where you want them to be.  There might be fissures in the wood itself into which you press the crystals of your choice, or you can bind them on using fine silver wire.  Or you might get totally modern and use superglue!  There isn’t a right or wrong way to do this.  You might even start with a clear idea that you are going to do it one particular way and then find that you are compelled to create it totally differently one you have begun!

When your wand is made, you then prepare it for use.  As it is really an extension and amplification of your psychic energy, spend time with it and it’s absolutely fine to talk to it aloud or in your head.  You can say whatever you feel moved to say, but it’s always good to welcome it and explain that you have chosen it and what kind of work you will expect it to do.

Then, hold the wand so that the tip is pointing to heaven and the base is pointing down to the earth.  Allow your mind to clear and slip into a light meditative state.  As you look at the wand, see energy coming from the wand itself that goes right down into the very earth, from which it will draw on natures cycles and power.  Then see that energy traveling up the wand and coming out of the top and streaming up into the heavens and then looping back down into the wand itself. What you are doing is setting your intention to harness the power of the earth and heavens in your wand.  When you feel its complete, imagine sealing the energy at either end.  And then your wand is ready for use!