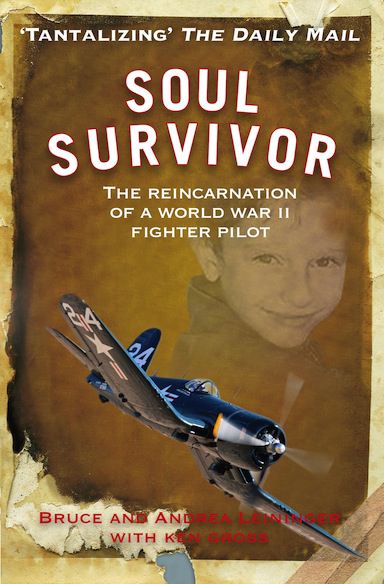 This fab book from Hay House is all about reincarnation and is unlike any other book I have come across on the subject.

Andrea and Bruce Leininger were upset when their two year old son, James, began to have nightmares that made him thrash and cry out in his cot, but they were amazed and bewildered when they realised that the young boy was talking in his sleep over and over again about the same terrible event. Whilst they were trying to make sense of what took place during the night, James’ play and conversation during the day soon began to reveal precise details about planes and events during World War 2 that no child could possibly know.

Eventually they were forced to ask the question – was their son James the reincarnation of a young American WW2 pilot who had died when his plane was shot down in flames? This New York Times Best Selling book charts Bruce and Andrea’s meticulous efforts in researching the World War 2 events that corresponded with James’ nightmares, piecing together names, dates, and details of what happened during that terrible time that led to the death of a young fighter pilot named James Huston.

Along their way, they connect with a group of WW2 veterans that had served alongside James Huston and who were around at the time of his death. They also contact Carol Bowman, an expert who has published books on evidence for reincarnation in children to help them make sense of what is happening. Eventually, the young James attends a veteran’s reunion, where he is able to name people without being introduced. In an extraordinary twist, he even meets the then octogenarian sister of the deceased James Huston. The details uncovered led the family to the conclusion that their son was indeed the reincarnation of the pilot who had died under such tragic circumstances, and result in him being the subject of a documentary filmed and aired in the US.

Many books on reincarnation collate case studies and then compare common findings to arrive at what they appear to tell us about the nature of our existence. Soul Survivor doesn’t tell us anything about what it all means. At one point when father and son were playing, Bruce kisses James and tells him how happy he is to have him as a son and James responds with, “That’s why I picked you; I knew you would be a good daddy”. The enormous implications of this statement by the young James are never explored. Instead, the book focuses on the family’s journey of discovery and the process they went through, both in adjusting to the very real possibility that their child could remember a previous life and in helping him come to terms with it and grow up to be a happy and adjusted boy.

One touching aspect is the veterans’ response to James’ story. Fearing rejection or disbelief, Bruce first tells them his interest in their memories is because he intends to write a book on the ship on which they all served. Eventually he plucks up the courage to reveal the truth, only to find a quiet acceptance amongst people who have their own stories to tell of supernatural events that transpired during their own harrowing experiences.

Other books go much more into what reincarnation tells us about the nature of our existence, but if you need persuading that we all may have lived before and could live again, the detail of the evidence in this story will certainly give you a lot to think about. And if you want to follow one family’s account of how they handled the dawning realisation that their child may have come into this life with memories of a previous incarnation, Soul Survivor is a gripping tale of an ordinary American family faced with the possibility of eternal existence.

Find this and other Hay House books