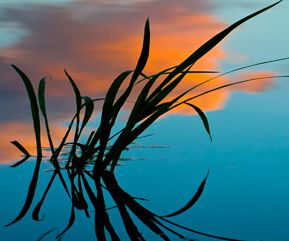 A bundle of reeds is a powerful emblem, and they are symbolic of the Mesopotamian goddess of life, Ishtar.  Ishtar represents the divine feminine and the power of creation.

A sacred bundle of reeds as a representation of Ishtar is symbolic of attributes such as:

Furthermore, reeds are symbolic of water, and the symbolism of water has a universal undertone of purity and fertility. Symbolically, it is often viewed as the source of life itself as we see evidence in countless creation myths in which life emerges from primordial waters.

Interestingly, we are all made of water, and so we can liken many of these myths and allegories to our own existence (the macrocosm mirroring the microcosm and vice versa). Further, we can incorporate symbolism of circulation, life, cohesion and birth by associating the creative waters of the earth with the fluids found in our own body (i.e. blood).

In ancient Mesopotamian relics, a spiraling motif of reeds is found, and that’s symbolic of the way of life.  Specifically, the center of the spiraling reeds represents the seed (birth) of human life (or consciousness). The reeds splaying out from the center is symbolic of growth, expansion and evolving awareness into new areas of development.  This also speaks about nourishing our souls for optimal growth.

The goddess Ishtar, for whom this reed is represented, is known by many names: Inanna, Astarte, Asherah to name a few.

A prime reason the reed bundle is a sacred symbol to Ishtar is because one legend states she bound reeds together to make a vessel that would sail upon the waters of the great flood caused by Enki (or Ea), who wanted to annihilate humankind.  Ishtar gathered up all humankind upon her reed boat and thus saved the human race.  She is also known as the River of Life as she travels on the waters saving mankind.

So the next time you wish to galvanize your intent to live life to the fullest, focus your awareness around the themes offered by Ishtar and her symbol of the spiraling reeds.