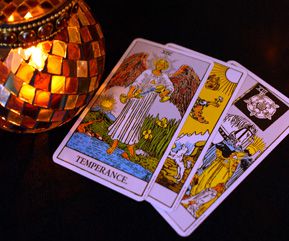 Fast food, fast cars, speed dating, global communications at the touch of a button – if we want something, we want it now, and that includes enlightenment!  But our soul is eternal and the soul’s journey takes just as long as it takes, across as many lifetimes as necessary.

These next two cards – The Hanged Man and Death – remind us that  sometimes we need to pause and that our lives reflect a greater cycle of death and rebirth, two prospects that can seem scary until we get that we are eternal and everything comes to us in time!

A young man hangs upside down by one foot.  The Hanged Man usually turns up when life seems to slow down. Hold on, it says.  Don’t just do something, sit there.

If you’re longing to launch into an exciting new venture, a card flagging up that a go-slow is imminent can be as welcome as a cat at a bird table.

But The Hanged Man sees things that we miss as we rushed by.  He tells us to stop for a while and wait until we’ve got a whole new perspective before we move into action.

In particular, if we insist on running the same old circles around the same old problems, he gently reminds us that he’s got all eternity to wait for us to smarten up.

The key to accepting his wisdom lies in knowing that this card is ruled by Neptune and, like the vast, fathomless oceans, there’s a lot going on underneath even if the surface seems calm.

If you can join him and just hang out for a little while, just as surely as spring follows winter, things will start to move again.

Find a class and learn to meditate properly! The more you can clear your mind and practice not-doing, the more you’re tuning in with The Hanged Man’s energy.

Remember, you’re not trying to find a solution to whatever challenge or obstacle you think you face.  You’re learning how to stop the whirlwind.

You can meditate eyes open or eyes closed, sitting Zazen or walking slowly.  Look for a class in the kind of meditation that suits you – and don’t be in a rush to do it perfectly!

I am willing to submit and see this situation in a new way.

If the sight of Death’s hooded figure scares you, let me reassure you that this is a very good card with very bad PR!  Following the inertia of The Hanged Man, things are on the move again.

But the great cycle of life insists that the old dies to make way for the new.  Death doesn’t mean a literal death.

But it does talk about endings (you can’t have a beginning of something without there having been an end of whatever came before it) and the need to clear out whatever is blocking the new growth that is coming.

Death arrives to remind us that everything has its season and then passes, but that new life always follows.  We can look forward to the new as surely as we can mourn what’s passing.

And if all of that doesn’t dispel any chills, look at it this way.  We aren’t through the major arcana yet. There’s a lot more to come, culminating with a dancer at the centre of The World.

That alone should reassure you that Death might herald an ending, but the whole show isn’t over by a long chalk!

Declutter!  At the time when I wrote this I was planning to move house.  Although we hadn’t yet found our new home, we were already sorting through our stuff and packing to send a message to the Universe that we’re serious about this and expect to be taken seriously and find the dream home that I’d cosmically ordered!

And, just to prove that even I’m not immune to the mystery of magic, I was amazed at how the energy around our then home lifted when we did that.

So be as ruthless as Death himself and scythe through all those things that are really just adding weight on your journey.  That goes for habits and behaviours you should ditch too.

Cleanse your home and then cleanse yourself and when you’ve done walk around clapping your hands (a fantastic energy disburser) and burn some sage which is also great for clearing.

And if Death has claimed something in your life – a job has gone, a partner left, a friend moved away – hold a small ceremony for yourself.

Gather together objects that remind you of what’s passed – anything from plane tickets to photographs.  Make a small shrine of them and place a candle before it, lighting the candle each night.

Mourn for three days and grieve as much as you need to. Then burn whatever can be burnt and bury the rest, saying your final goodbyes as you do so.

I release the old from my life to make way for the new.

The next two cards bring two angels arriving in tandem – Temperance and The Devil – as we get caught between balance and obsession on our soul’s journey!

One thought on “The Hanged Man and Death”